Inspiring the Future . . . Different by Design 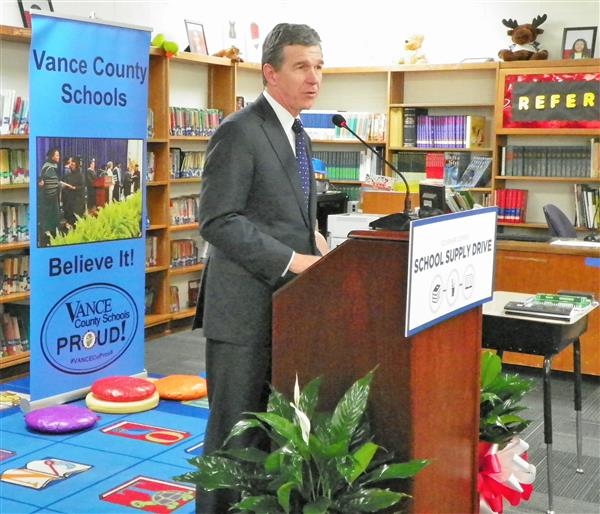 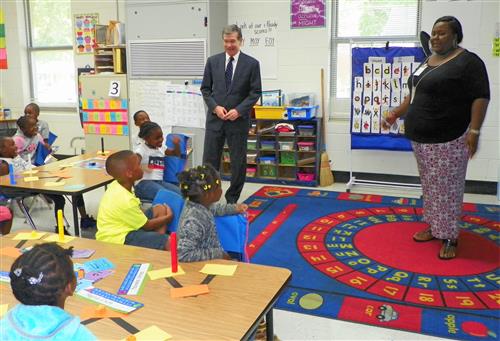 Cooper met for about 20 minutes at the beginnng of his visit to the school with five E.M. Rollins teachers, including Aqueria Hargrove, Regina Hilliard, Ebony Watkins, Patrick Vincent and Tiffany Manning. Several local educators who are leaders in the Vance County chapter of the N.C. Association of Educators also met with the governor.

Principal Stephanie Alston then led Cooper and other dignitaries on a tour of the school that included visits to five classrooms. In each of the classrooms, the governor spoke to the students and the teachers. His favorite question to ask students was, "How many of you want to grow up to be a teacher?" In every classroom, most of the students raised their hands.

The classrooms visited were the LEGO Robotics room, with Deirdre Baldwin, the teacher, and second graders from Mrs. Hilliard's class; the kindergarten class of Skyler Miles; the first-grade class of Cierra Ellis-Harris, where the students sang a song and danced; the third-grade class of Mieya Petitt; and the fourth-grade class of Lacreasha Henderson.

At the end of his visit, Cooper held a press conference in the school's media center during which he explained that beginning today citizens can make donations to the School Supply Drive by taking their items to any State Employees' Credit Union location in communities across the state. Donated items also will be accepted at any state building in Raleigh. The donations later will be distributed to public schools throughout the state.

Gov. Roy Cooper has his picture made with local educators after

meeting with them at E.M. Rollins Elementary School.

You can add a copyright statement or legal disclaimer in this area if necessary
Copyright © 2002-2020 Blackboard, Inc. All rights reserved.